We are a team of office design, CAD and space planning specialists

These days with rising office rentals the main request we get is for an office maximisation exercise, in other words we are asked to produce space plans that show the maximum number of workstations above all else. However, when designing an office layout it is also important to include soft seating and breakout areas too. This is not just as it is nice to have comfy seating; they act an as important tool in encouraging communication.

In an office design where there are just desks the staff would tend to have casual conversations only with the staff that they sit opposite or adjacent to, meaning that the sales staff chat with the sales staff and the marketing staff chat with the marketing staff. However by introducing breakout areas with comfy seating and perhaps a coffee machine you are encouraging staff to remain in the office during their breaks and are much more likely to sit and chat with someone from another department. This could mean that that important sales lead could be picked up from a chat between someone from sales and marketing.

Soft seating also helps you to put more desking into an office design without it looking like a chicken run. It visually breaks up the space and that in turn allows you to make the desk areas denser. They also help with keeping noise levels down both by breaking up the runs of desks, and also by giving staff a space to chat (rather than shouting over desks). They can be used for informal meetings, which can free up a meeting room, and can make meetings feel less formal (it’s a lot less threatening to be called for a chat on a sofa, than to be called into a meeting room).

Finally soft seating is often the one point that you can make a design statement in a modern rented office. Often the majority of walls are glazed or covered with full height storage cabinets, meaning that you only have the flooring (which you may not want to change), the columns (if there are any) and the furniture to play with design-wise. Most desks tend to be fairly functional  and although you can choose a funky fabric for the chairs, most offices would again choose functionality over form. However a piece of soft seating can be like a sculpture in a large open plan office, and a statement piece such as the Egg Chair (see below) can make an ordinary office look like a funky modern office. 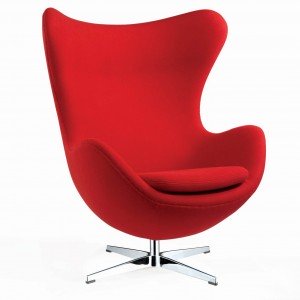